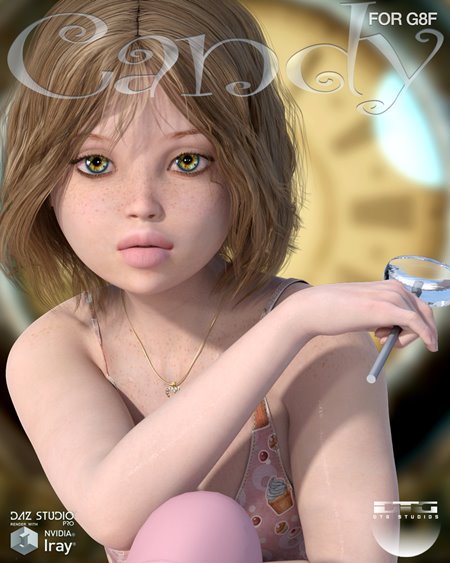 Candy’s unique face is a combination of a custom morph and DAZ’s Genesis 8 female morphs plus ZevO’s Growing Up for Genesis 8 Females. Her body was sculpted by carefully tweaking DAZ’s Genesis 8 female morphs and ZevO’s Growing Up for Genesis 8 Females, which means better clothing compatibility. Candy’s skin was created using photo resources and hand painting with bump, specularity and subsurface scattering maps specially engineered to bring out every realistic detail. Merchant resources were used to create her skin, eyes, and makeup, but none were used “as is”, so each one is unique to Candy. There are 5 brow colors for the V8 eyebrows and an LIE eyebrow option so you don’t need V8 to use her. She can be turned into a fairy or elf with the Fairy Ears INJ morph and Fairy Skin/Makeup.